A conservative group said it is stepping up its efforts to remove President Donald Trump from office with a new mobile billboard campaign.

Republicans for the Rule of Law has announced a truck emblazoned with the image of Vice President Mike Pence and the messages “Remove Trump For Pence” and “Pence, It Could Be Worse” will be driven around Washington, D.C. for eight hours on Tuesday, starting at 10 a.m. near the Capitol Building where Trump is currently on trial in the Senate for his Ukraine misconduct. 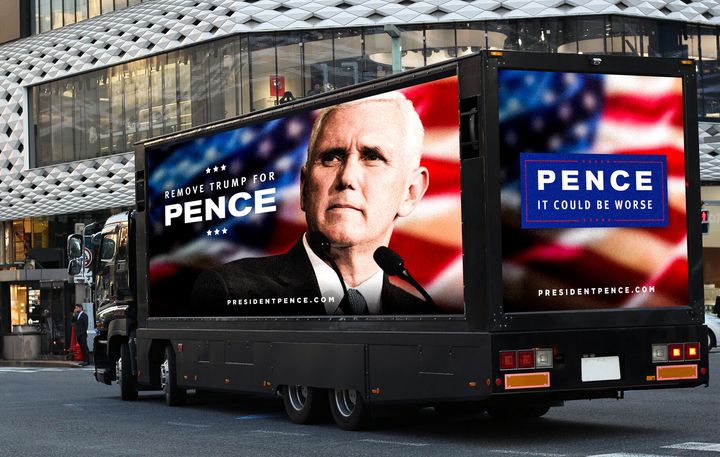 Republicans for the Rule of Law

Republicans for the Rule of Law said a truck with anti-Trump messages, like the one mocked up in this supplied image, will be driven around Washington, D.C. for eight hours on Tuesday.

“Removing President Trump from office wouldn’t undo the 2016 election. The same voters and electors who chose President Trump also chose Vice President Pence,” the anti-Trump group’s spokesperson Tim Miller said in a statement sent to HuffPost, alongside a mocked-up image of the truck, on Tuesday.

”That’s why we’re reminding Republicans that they should not fear a fair trial, because even if Trump is removed that still leaves them with President Pence which is… not bad, I guess?” he added.

The group, which is part of the conservative Defending Democracy Together advocacy organization, last week launched the “President Pence” website and the following TV ad:

WASHINGTON (AP) — In the week since his acquittal on impeachment charges, a fully emboldened President ...

WASHINGTON – Americans remain almost evenly divided over the impeachment of President Donald Trump after his acquittal ...