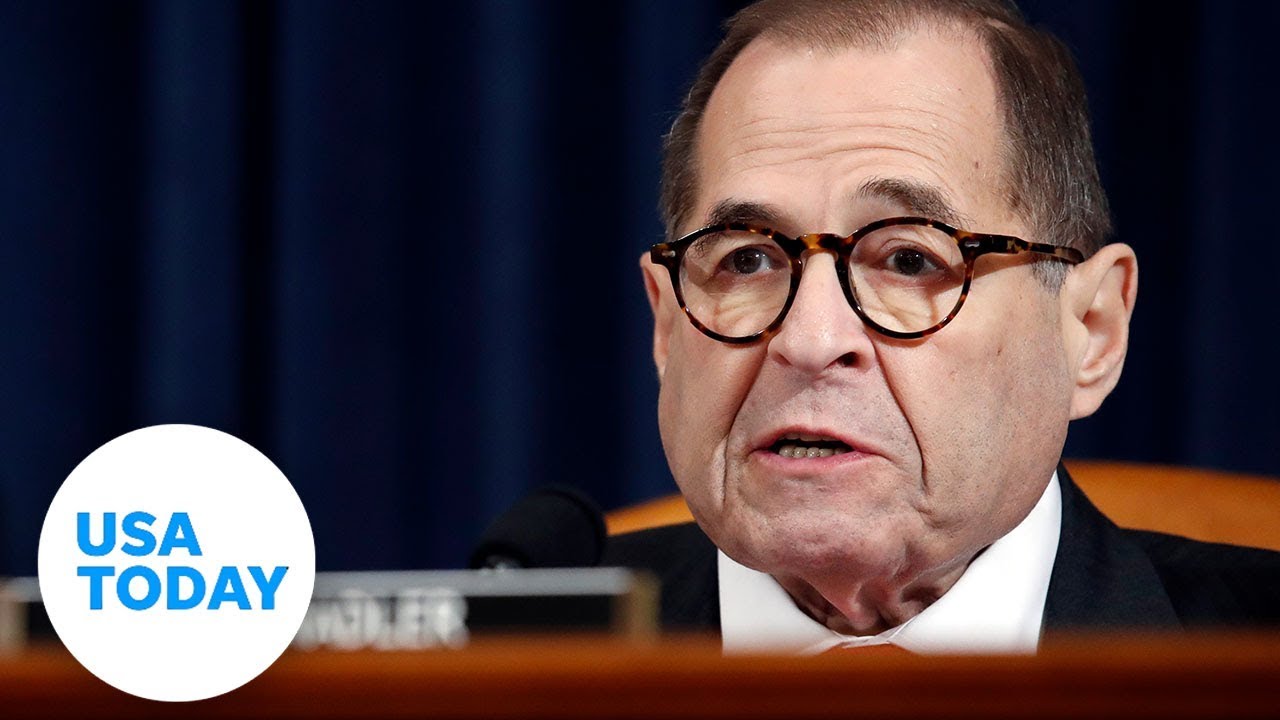 WASHINGTON – Another partisan clash in the House impeachment inquiry is expected Monday as the Judiciary Committee receives a briefing about two reports: one report from three other panels that found President Donald Trump solicited foreign interference in the 2020 election, and another about the constitutional basis for impeachment.

A confrontation is anticipated because the Intelligence Committee will walk lawmakers through the 300-page report on Trump’s conduct in Ukraine.

Follow USA TODAY for updated reports from the hearing and the day’s news on the impeachment inquiry.

Stephen Castor, a staff counsel presenting the Republican version of the inquiry from the Intelligence Committee, said the evidence didn’t support allegations that Democrats made.

“The impeachment inquiry’s record is riddled with hearsay, presumptions and speculation,” Castor said.

Intelligence Chairman Adam Schiff, D-Calif., has suggested that the July 25 call sounded like a criminal shakedown because Trump said he would provide Javelin anti-tank weapons, but also asked for a favor of an investigation.

But Castor said the call summary reflected no pressure or conditions attached to Trump’s request that Zelensky investigate Biden.

“Simply put, the call was not the sinister mob shakedown that some Democrats have described,” Castor said.

“We are here today because Donald J. Trump, the 45th President of the United States, abused the power of his office—the American presidency—for his personal political benefit,” Goldman said.

He said the Democratic report had four key findings:

‘That is not a point of order’

Another partisan clash Monday involved the evidence that the House Intelligence Committee gathered in the impeachment inquiry against President Donald Trump and provided to the Judiciary Committee.

“That is not a point of order,” Nadler said, gaveling Reschenthaler to silence. “The gentleman will suspend and not make a speech.”

Delivering a rebuttal for Republicans, Counsel for House Republicans Steve Castor argued Trump did not abuse his powers or obstruct Congress.

Democrats are trying to impeach Trump simply because they don’t like him, Castor said, attacking an “unfair process.”

“To impeach a President, who 63 million people voted for, over eight lines in a call transcript is baloney,” he said. The evidence Democrats have presented as a case for impeachment, however, extends beyond the rough transcript of Trump’s July 25 call with Ukrainian President Volodymyr Zelensky.

Berke: ‘Trump did what a president of our nation is not allowed to do’

“This is a big deal. President Trump did what a president of our nation is not allowed to do,” he said.

Berke argued Trump abused his power “in the ways the founders feared the most” by putting his own interests over the country’s, betrayed the nation by hurting national security interests, and corrupted American elections.

Berke added that evidence of Trump’s misconduct was were “so brazen, so clear,” that was “hard to imagine that anybody could dispute those acts, let alone argue that that conduct does not constitute an impeachable offense or offenses.”

Rep. Mike Johnson, R-La., said that Berke used language that criticized the president’s conduct and should be stricken from the record.

“The witness used language which impugns the motives of the president and suggests he’s disloyal to his country,” Johnson said. “Those words should be stricken from the record and taken down.”

Judiciary Chairman Jerry Nadler, D-N.Y., said the rules of decorum apply to the House members rather than witnesses.

“The subject of the hearing is the president’s misconduct, so none of us should find it surprising that we are hearing testimony that is critical of the president,” Nadler said.

Nadler found that Berke’s comments weren’t disorderly, but Johnson insisted that they were out of bounds. Johnson appealed Nadler’s ruling to dismiss his objection, which the committee tabled on a party-line vote of 24 to 15.

Republicans pressed their request for a hearing where they choose the witnesses, which led to a shouting match between Judiciary Chairman Jerry Nadler and several members of the committee as he refused to recognize them.

Rep. James Sensenbrenner, R-Wis., had requested GOP hearing because his colleagues were upset that Democrats held a hearing Wednesday with academic experts on impeachment with three Democratic witnesses and one Republican. House rules allow for minority members of a committee “the right to hold a minority day of hearings on topics considered by the committee.”

Rep. Andy Biggs, R-Ariz., raised a point of order to schedule a hearing. But Nadler said the request wasn’t timely until the committee meets to consider articles of impeachment.

“That is not a proper point of order at today’s hearing,” Nadler said.

Biggs raised the point of order again after the top Republican, Rep. Doug Collins of Georgia, completed his opening statement. He asked to schedule the GOP hearing at a reasonable time.

“I inquire and insist Mr. Chairman that you immediately schedule a minority hearing day,” Biggs said.

But Nadler said it wasn’t a proper point of order.

Sensenbrenner tried to appeal the ruling of the chairman, to force a vote on the maneuver. But Nadler said he made no ruling that required a vote.

Rep. Matt Gaetz, R-Fla., asked with a raised voice if the meeting would feature just staff members asking other staffers questions for four hours “while the members are dealt out of the whole hearing” to overturn the results of the 2016 presidential election.

Nadler gaveled him down.

“This meeting will be considered in an orderly fashion,” Nadler said. “The gentleman will not yell out. You will not attempt to disrupt the proceeding.”

“We don’t have a crime,” he said, also criticizing Intelligence Committee Chairman Adam Schiff, D-Calif., for not appearing.

Republicans have attempted to call Schiff as a witness, a request so far rebuffed by Nadler.

Collins denounced the inquiry as a way to remove Trump from office without winning an election.

“This is all about a clock and a calendar because they can’t get over that Trump is President of the United States and they don’t have a candidate,” Collins said.

Nadler opened the hearing to review the evidence in the impeachment inquiry of President Donald Trump by saying Trump put his own interests before the country’s.

He reminded the audience and lawmakers that impeachment was a “solemn, serious undertaking” meant to address threats to democracy.

Walking through the evidence and testimony so far in the impeachment inquiry, Nadler observed, “the President welcomed foreign interference in our elections in 2016.  He demanded it for 2020.  Then he got caught.”

In doing so, Trump “violated his most basic responsibilities to the people” and broke his “oath” of office, Nadler concluded.

‘America is done with this’: Protestor briefly disrupts impeachment hearing

A bearded man stood up from the back of the committee hearing room and began shouting against the inquiry.

“Jerry Nadler and his Democratic colleagues are committing treason against this country,” the man shouted, holding up his phone as if to record the incident. “America is done with this.”

Nadler, D-N.Y., kept pounding his gavel as the man shouted for about 34 seconds, as he was escorted out by Capitol police.

“We voted for Donald Trump,” the man shouted. “We are sick of the Democrat impeachment.”

Republicans have called on Intelligence Chairman Adam Schiff, D-Calif., himself to answer questions.

The focus on Schiff is because the anonymous whistleblower, who sparked the inquiry about Ukraine, asked Schiff’s staff how to file a complaint with the inspector general for the intelligence community. But Schiff has said he doesn’t know who the whistleblower is and didn’t help draft the complaint.

‘Our democracy is what is at stake.’:Pelosi says House will draft impeachment articles against Trump

Rep. Jim Jordan, R-Ohio, offered a glimpse of the argument at a hearing Wednesday, when he suggested Democrats wouldn’t call the whistleblower to testify “because the whole world discovered that Adam Schiff’s staff had talked to the whistleblower, coordinated with the whistleblower.”

Schiff told reporters the House rules adopted for the inquiry called for staffers to present the report. He dismissed Republican arguments for ignoring “voluminous evidence” that Trump abused the power of his office. “In so doing, the president undermined our national security and the integrity of our elections,” Schiff said.

If the House adopts articles of impeachment against Trump, the president said in a tweet Thursday he would like to question Schiff and Biden, among others, during the Senate trial.

The Judiciary Committee briefing sets up another partisan confrontation, like the hearing on Dec. 4 with law professors defining the grounds for impeachment, where lawmakers of each party ask witnesses to confirm information that bolster their own side.

The Democratic investigation from the Foreign Affairs, Intelligence, and Oversight and Reform committees found that Trump withheld official acts such as a White House meeting and nearly $400 million in military aid in order to compel Ukraine to deliver two investigations to help his reelection campaign in 2020.

“This report chronicles a scheme by the president of the United States to coerce an ally, Ukraine, that is at war with an adversary, Russia, into doing the president’s political dirty work,” Schiff said. “We do not intend to delay when the integrity of the next election is at risk.”

But Stephanie Grisham, a White House spokeswoman, said the report was the result of “a one-sided sham process.”

“Chairman Schiff’s report reads like the ramblings of a basement blogger straining to prove something when there is evidence of nothing,” Grisham said.

Republicans from the three panels drafted their own minority report defending Trump. Trump has said he was justified in urging Ukraine to fight corruption and Republicans noted the president met with Zelensky and released the military aid without Ukraine beginning any investigations.

“The evidence presented does not prove any of these Democrat allegations, and none of the Democrats’ witnesses testified to having evidence of bribery, extortion, or any high crime or misdemeanor,” the GOP report said. “The fundamental disagreement apparent in the Democrats’ impeachment inquiry is a difference of world views and a discomfort with President Trump’s policy decisions.”

How the hearing will work

Two lawyers for the Judiciary Committee, Barry Berke for the Democrats, and Stephen Castor for the Republicans, will present first, for up to one hour divided between the two.

Then, lawyers for the Intelligence Committee, Daniel Goldman for the Democrats, and Stephen Castor for the Republicans, will present for up to 90 minutes divided between the two lawyers.

Following questioning from Nadler and Collins, the Intelligence Committee lawyers will then take questions from the 41 members of the Judiciary Committee.

Goldman and Castor previously played a prominent role in both parties’ questioning during the Intelligence Committee’s public hearings with impeachment inquiry witnesses.

5 Takeaways From The Nevada…

Mike Bloomberg Gets A Rude…

Read Live Updates From The…

WASHINGTON (AP) — In the week since his acquittal on impeachment charges, a fully emboldened President ...

WASHINGTON – Americans remain almost evenly divided over the impeachment of President Donald Trump after his acquittal ...